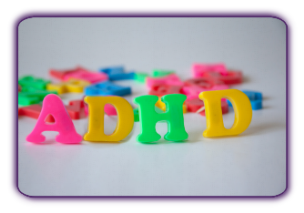 Attention Deficit Hyperactivity Disorder (ADHD) is a developmental disorder. Someone has to have had the condition since childhood to meet the diagnostic criteria, but it is often missed as people tend to focus on the hyperactivity aspect, which is not always present. There are three types of ADHD:
These are some of the difficulties that someone with ADHD might experience (adapted from www.helpguide.org):
Trouble concentrating and staying focused
People with ADHD often have difficulty staying focused and attending to daily, mundane tasks. For example, they may be easily distracted by irrelevant sights and sounds, quickly bounce from one activity to another, or become bored quickly. Symptoms in this category are sometimes overlooked because they are less outwardly disruptive than the ADHD symptoms of hyperactivity and impulsivity—but they can be every bit as troublesome. The symptoms of inattention and concentration difficulties include
Hyperfocus
While you’re probably aware that people with ADHD have trouble focusing on tasks that aren’t interesting to them, you may not know that there’s another side: a tendency to become absorbed in tasks that are stimulating and rewarding to the exclusion of everything else, even sleeping and eating. This paradoxical symptom is called hyperfocus.
Hyperfocus is actually a coping mechanism for distraction—a way of tuning out the chaos. It can be so strong that someone becomes oblivious to everything going on around them. For example, someone may be so engrossed in a book, a TV show, or their computer that they completely lose track of time and neglect the things they’re supposed to be doing. Hyperfocus can be an asset when channeled into productive activities, but it can also lead to school, work and relationship problems if left unchecked.
Disorganisation and forgetfulness
When someone has ADHD, life often seems chaotic and out of control. Staying organised and on top of things can be extremely challenging—as is sorting out what information is relevant for the task at hand, prioritising the things they need to do, keeping track of tasks and responsibilities, and managing their time. Common symptoms of disorganisation and forgetfulness include
Impulsivity
If someone suffers from symptoms in this category, they may have trouble inhibiting their behaviours, comments, and responses. They might act before thinking, or react without considering consequences. They may find themselves interrupting others, blurting out comments, and rushing through tasks without reading instructions. If someone has impulse problems, being patient is extremely difficult. For better or for worse, they may go headlong into situations and find themselves in potentially risky circumstances. Common symptoms of struggling to control impulsivity include
Emotional difficulties
Many people with ADHD have a hard time managing their feelings, especially when it comes to emotions like anger or frustration. Common emotional symptoms of ADHD include
Hyperactivity or restlessness
Hyperactivity often presents as someone being highly energetic and perpetually 'on the go' as if driven by a motor. Common symptoms of hyperactivity include
For many people with ADHD, the symptoms of hyperactivity become more subtle and internal as they grow older whereas inattentiveness tends to get worse as the pressure of life increases.
ADHD is usually treated through a combination of medication and therapy. It can't be cured but the symptoms can become more manageable. The usual medications for someone with ADHD are stimulants (such as Ritalin), which increase activity in parts of the brain that control attention and behaviour.
Back to content